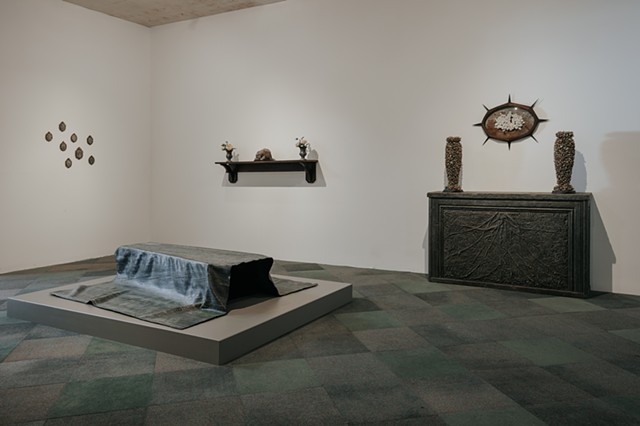 Melancanny continues Needham’s ongoing exploration of myth, belief and residual melancholia and its postcolonial incarnations. Acknowledging echoes of historical European aesthetics and museum practices, this new body of work problematises colonial remnants of display that continue to assert influence within the archiving of histories, display of cultural and environmental artefacts and the collection, classification, production and consumption of contemporary art.

A series of intricately made sculptural works are composed in an expansive installation that references familiar qualities of 19th century interior ornamentation. With an overarching gothic sensibility, hand-made, manipulated, cast and re-cast objects are laboriously produced in resin, ceramic, lead and wood among other materials. These objects adorn mantles, altars and shrines, each amplifying uncanny idiosyncrasies around mimicry and memorialisation.

Despite being foregrounded on a deep reverence for the natural environment, the assorted objects act as cultural and environmental relics obscured by disconnection from their original source, playing with what is real and what is artificial.

Needham says “By distilling and parodying a specifically colonial tone of collection and display, I hope to evoke and question enduring museological practices and the correlating way in which dominant narratives and histories are cemented into a collective consciousness. With the composition of pieces being conservatively posed and quietly subversive, I hope this will be a pivotal part of an engaging and problematising curiosity created through the installation.”